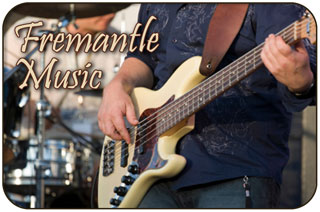 There is a dedicated, diverse music scene in Fremantle. Appreciate the dazzling arts of the many talented buskers on the streets of Fremantle. Enjoy live music every day of the week, in the numerous fantastic bars and hotels, each one friendly and interested in helping you to enjoy your time in Fremantle!

FREO is alive and vibrant throughout the week, but at the weekends it really is pulsating with crowds of happy humans who come out to enjoy life and socialise. Join in at a dance, music event, festival, market, show, performance or top class concert.

Learn to perform or learn to play a musical instrument right here in Fremantle...you can participate at any level. 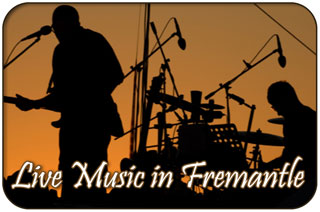 A celebratory atmosphere is all around as you stroll through Fremantle.

Watch the buskers perform outside the Fremantle Markets...take a stroll in Esplanade Park...wander around the vibrant Fishing Boat Harbour...stop for lunch on the bustling Cappuccino Strip...shop in the unique boutique stores...have a cold beverage in a pub...have a swim at one of the beautiful beaches... and listen to the music of Fremantle all around you. 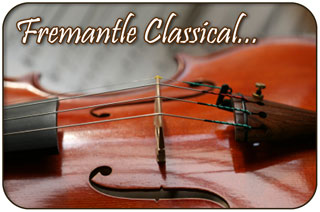 Fremantle Arts Centre
Check out the Music Events at the Fremantle Arts Centre, Finnerty Street.
From October to March there's Sunday Music for Free! Enjoy a picnic with family or friends or a wood fired pizza whilst listening to the live beats! Great local and touring acts throughtout Spring and Summer.

Freo.Social
Freo.Social is set on the site of the historic Artillery Drill Hall in the heart of Fremantle. Parry Street, Fremantle.  Freo's oldest newest venue! An iconic part of Fremantle's live music scene, re-invented for the best gigs in town.

Kidogo Arthouse
Kidogo Arthouse holds a multitude of unique experiences and events all year round, including exhibitions, concerts and live music festivals.

Fremantle's Pubs, Breweries and Licensed hotels are among the best in Western Australia. The port city has the best draughts from around the globe as well as the tastiest brew from right here in Fremantle.
Check out Who's Playing in Freo, with the Fremantle Gig Guide. 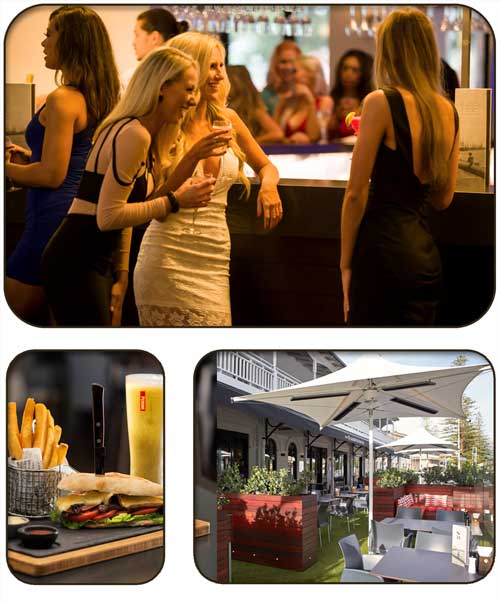 Open 7 days a week, Marine Lounge Bar is the perfect spacious and stylish spot to chill out in the heart of Fremantle.

Step in for a coffee and bite to eat, or stay to enjoy the extensive range of wines, beers, spirits, cocktails, aperitifs and champagne by the glass whilst taking in the fresh air and beautiful park views on Marine Terrace in Fremantle. With its team of energetic staff, this spacious and stylish bar is the perfect spot for guests entertainment, corporate clients to catch up on emails and/or meet up with workmates for Happy Hour every day from 5pm. Feeling peckish? The Marine Lounge Bar is home to WA’s best steak sandwich which we recommend every visitor to Fremantle must-try this award-winning dish! For something lighter yet comforting kind of food, try our all times favourite Spicy WA cuttlefish or Tiger Prawns Pizza specially made for sharing.

The Ball and Chain 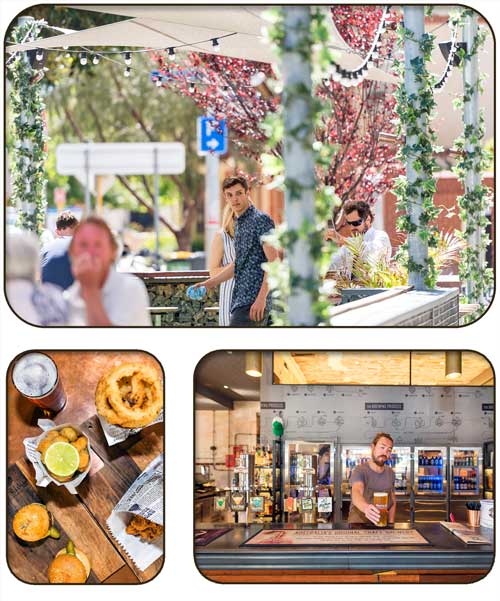 This historic pub is one of the most important sites in WA – it housed the first convicts to arrive in the state.

The Ball & Chain – off the grid & on the corner! There is always something happening at the Ball & Chain. So lose the excuses and get on in; you will be blown away with the décor, amazing team, WA’s widest range of Matilda Bay craft beer and extensive whiskey and spirit collection. Winter or Summer… the Ball & Chain is the place to visit in Fremantle. Enjoy Matilda Bay craft beer on tap. We’ve brought this iconic brand back to its home town of Fremantle in a big way, 31 years after its inception. Step into Bourbon Street – a stylish lounge area with floor to ceiling shelves loaded with the best range of whiskey brands from around the world. Feeling peckish? Our Pub Grub Menu has been hand selected to perfectly accompany your favourite craft beer or whiskey. Choose from a range of tasty food or gourmet snacks!

The Ball and Chain 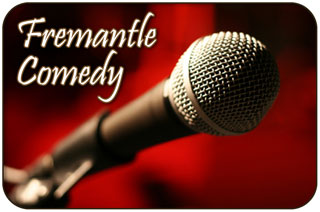 John Butler,  American-Australian singer,  songwriter, and music producer, lived in Fremantle during his teenage years, and he started his music career busking in the city's streets.
He is the front man for the John Butler Trio,  a roots and jam band that formed in Fremantle, Western Australia, in 1998.

The Waifs, Little Birdy and Eskimo Joe all belong to the 'Freo Sound':
The Waifs are an Australian folk rock band formed in 1992 by sisters Vikki Thorn and Donna Simpson as well as Josh Cunningham.
Little Birdy are an Australian indie rock band in 2002 by Katy Steele, Matt Chequer, Simon Leach and Scott O'Donoghue.
Eskimo Joe is an Australian alternative rock band that was formed in 1997 by Stuart MacLeod, on guitars, Joel Quartermain, on drums and guitar, and Kavyen Temperley, on bass guitar and vocals, in East Fremantle. Mick O'Donnell. Kavyen talks about Fremantle not only as the place where he lives but like it's one of his friends.
The 2008 documentary 'Something in the Water' explores the history and environment behind the development of local and nationally acclaimed musical talent in Western Australia. Maybe, it's the isolation from the rest of the country, but there is definitely an upwelling in talent from this city by the Indian Ocean.
Wikipedia: Fremantle 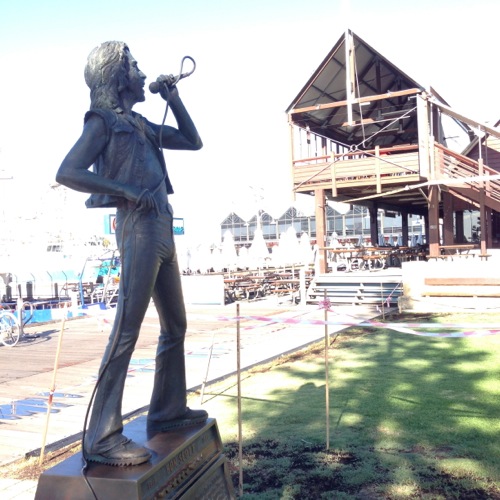 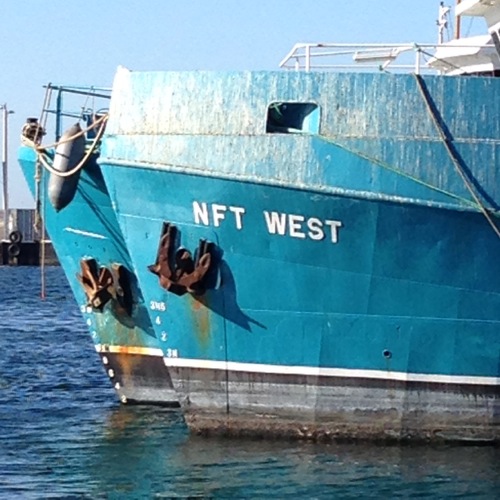 FORMER  LEAD SINGER OF ACDC ~ Bon Scott, lead singer of the Australian rock band AC/DC, lived in Fremantle as a boy. In 2009, a statue of Bon Scott, was erected at the Fishing Boat Harbour. Bon Scott was actually born in Kirriemuir, Scotland, but his family moved to Australia and he lived in Fremantle when he was ten.

What is a Busker? 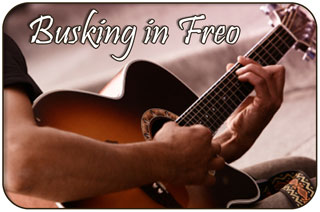 Street performance or busking is the practice of performing in public places, for gratuities, which are generally in the form of money and edibles. People engaging in this practice are called street performers, buskers, street musicians, minstrels, or troubadours. Street performance dates back to antiquity, and occurs all over the world.

Visiting us on your iphone or iPad? Thanks for visiting Fremantle Western Australia!