Lonely Planet named Fremantle as one of the top 10 cities to visit and Australia's 'secret city'!

Locals and visitors alike flock to Fremantle to capture some of that distinctive Freo Feel, a unique atmosphere, where you will experience a joy of life and a love of this unique rich city.

This cosmopolitan city is filled with opportunities to eat, drink, rest, dance, shop, socialise, tour, adventure, plus much more...Central Fremantle is a lively hub, pleasant, clean and very easy to get around on foot, by car, by scooter or by free CAT bus.

The Fremantle Railway Station, centrally located in Phillimore Street, is the terminus of Transperth's Fremantle line. The station is Heritage Listed and was classified by the National Trust in 1974.

Many of the city's most beautifully preserved Colonial and Gold Rush heritage buildings and other attractions are located in central Fremantle, such as the Round House, Fremantle Prison, Kidogo Arthouse, the Town Hall, and the Fremantle Markets.

Downtown Fremantle winds its way through pedestrian shopping areas, to the historic West End and includes Kings Square and the Fremantle Town Hall, which serves as the civic and cultural centre for Fremantle.  There is seating in the square, a small children's play area, toilets and shopping.  Many cultural events including movies, music, markets and festivals take place in the square. It is a lively and dynamic area of central Fremantle.

Central Fremantle offers a choice of food from all different cultures around the globe. Whatever your taste buds are in the mood for you can usually enjoy.

Food ranges from distinguished fine dining to super delicious fish and chips and lots in between.  You can check out the range of Central Fremantle Restaurants

Fishing Boat Harbour offers a experience all of its own. This busy working port for fishermen is blended beautifully with all types of eateries and a well known Brewery.

Fishing Boat Harbour is a deep water harbour which has picturesque boardwalks, a lively atmosphere and plenty of things to see and places to explore for people of all ages!

<<< Back to Fremantle's Suburbs 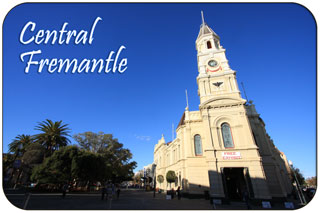 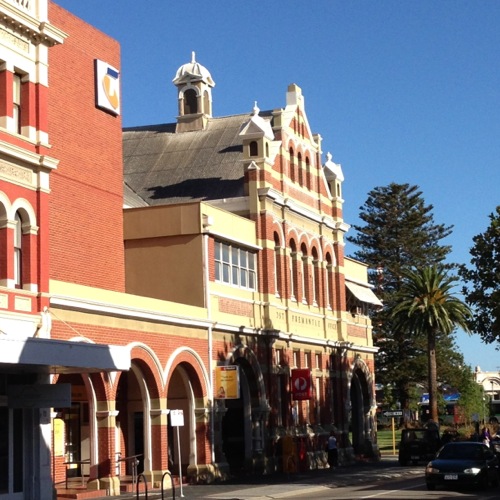 Fremantle lies on a series of limestone hills known by the Nyungar people as Booyeembara; the sandplain to the east is Gardoo. The original vegetation of the area was mainly Xanthorrhoea and eucalyptus trees, being fired annually (in late spring or summer) by the traditional owners. [Wikipedia: Fremantle Geography]

Fremantle has been recognised as the best preserved example of a 19th century port streetscape in the world.   The entire West End of Fremantle, including more than 250 buildings has been heritage-listed, the largest single place to be added to the State Register of Heritage Places.

Walking around Fremantle's West End is a never-ending visual delight with buildings adorned with fluttering flags, clear signposts on lampposts to get around, beautiful doors and balconies...the Fremantle West End is wonderful and it is officially heritage-listed in its entirety.  Glimpse life in Colonial and Gold Rush eras, look up to see the marvellous architecture seemingly everywhere you look.

Enjoy the excellent historical tour through the Round House and listen to the firing of the 1 O'Clock cannon. This 12-sided former gaol is Western Australia’s oldest public building, located in the Arthur Head Precinct on a headland overlooking the river mouth, with uninterrupted views of Cockburn Sound.

Other buildings on Arthur Head included the courthouse, cottages and two lighthouses.  Passing through Arthur Head is the Whalers Tunnel that enabled ease of access to Bathers Beach, Fremantle and the Long Jetty.

The Shipwreck Museum is the 'foremost maritime archaeology museum in the southern hemisphere' and was the original Maritime Museum.

We highly recommend a visit. Kids are engaged in the displays, there's lots to learn and lots to see. Excellent!

Fremantle West End Map and a movie of a Walking Tour of the West End.

The Fremantle Prison Prison, sometimes referred to as Fremantle Gaol or Fremantle Jail, is a former Australian prison and WA's only World Heritage Listed Site.

The 60,000 m² (15 acres) site includes the prison, gatehouse, perimeter walls, cottages, tunnels, and prisoner art. The prison was built by convict labour in the 1850s, and transferred to the colonial government in 1886 for use as a gaol for locally-sentenced prisoners. It is now closed as a prison.

Educational activities are regularly held for school children, as are exhibitions and re-enactments of historical events. Functions such as theme parties and dinners are held in the prison, with re-enactments serving as entertainment.

Tours of the prison show aspects of prison life and recount successful and attempted escapes. Sections of the tunnels are accessible, and night tours focus on the prison's reputation for being haunted.
Wikipedia
Fremantle Prison on Facebook.

Fremantle is always a bustling port city whether you arrive at the weekend or during the week!

Both locals and visitors enjoy the seaside atmosphere of fun mixed with great choice and a backdrop of tranquility.  You'll find the High Street brands plus a stunning array of gorgeous boutique and designer shops for fashion, accessories, lifestyle, gifts, homewares plus more, dotted around the streets of Fremantle and it's fringe.

A relaxed environment is created by the intertwining pedestrian-only walkways that connect throughout the central business district make it as pleasure to browse the diverse range of shops. There are plenty of places to eat and relax!  Travel around easily using the FREE Cat Buses! 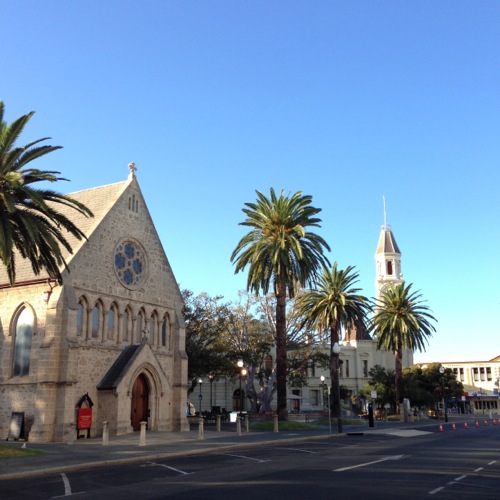 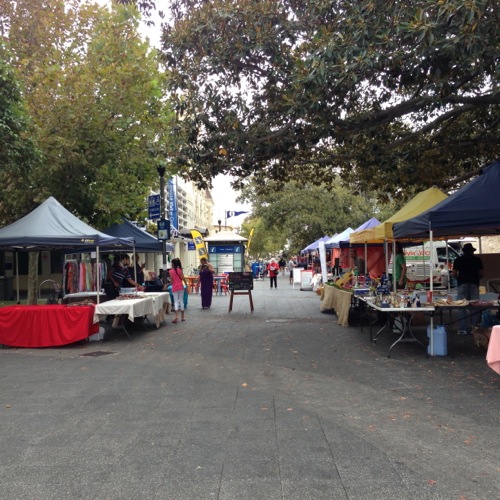 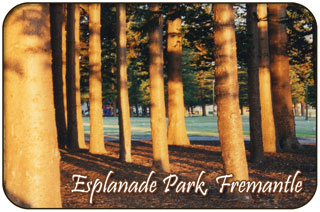 Esplanade Reserve offers so much to the visitor.  Only a few minutes walk from central Fremantle.

The park is filled with opportunities for people of all ages. This beautiful city park is ideally located between Fishing Boat Harbour and Fremantle City Centre.
There are benches to rest and this is plenty of shade, from the magnificent 100 or so grand Norfolk Pine trees.  This beautiful park offers a great place to spend a few hours, after swimming on Bathers Beach or shopping in town.

Within the reserve there is a small children’s climbing and play area which offers enough for kids of all ages. Enjoy a picnic on the grass or a light snack from the fabulous Carriage Cafe. The Carriage Cafe is a genuine 1912 West Rail Carriage that has been converted into a unique eatery. It has been on the Esplanade for over 30 years providing delicious food and great coffee as well as a friendly smile and great surroundings!

The Esplanade Youth Plaza attracts the vibrant youthful crowd and provides great opportunities for Skating in Fremantle. The EYP is a superb, purpose built award winning venue for skateboarding, BMX bikes, scooters and also has an outdoor parkour park, which is the first of its kind in Western Australia.

Located at the south eastern corner of Fremantle's Esplanade Reserve, it is a hub for young people and families.
The much acclaimed Fremantle Esplanade Youth Plaza also has a stage area for events and youth music gigs, a leafy promenade-styled footpath connecting the adjoining car park to the railway pedestrian crossing, a marine buoy incorporated into the bowl design (as a link to Fremantle’s maritime heritage), family ping pong area, 2 500 sqm of grass, 30–35 new trees and garden beds, plus seating and audience viewing areas. For all upcoming events and programs, please visit Freo Youth

The gorgeous and graceful Tourist Wheel stands magnificently at the edge of the Reserve, providing an inspiring backdrop. The 40 metre high ferris wheel has 24 gondolas and lifts you high above Freo for about 7 minutes.  This is enough time to enjoy the ride and take in some of the best views of Fremantle.

It's easy to see why Bather's Beach is one of Fremantle’s favourite local beaches!

Bathers Beach is a perfect beach to watch the sunset, as many of the locals do everyday! The generally calm waters  of this 300m stretch of white sandy beach offer safe bathing for everyone, although it is unpatrolled and this beach is especially popular with families. The Indian Ocean provides a much welcomed breeze, especially during the hot summer months of November – February.

The beach is separated in two by a groyne that juts out into the sea and the Kidogo Art House which is a "bustling centre for art activity" in a beautiful location at the ocean's edge! A picnic lunch or dinner on the beach as the sun goes down off Bathers Beach is always an unforgettable experience.

Bather’s Beach is only a 10 minute walk from Fremantle’s shopping and entertainment precinct via Essex Street or Collie Street (both main streets). Cross over Marine Terrace and walk through the delightful Esplanade Reserve until you reach the Railway Tracks.
Bathers Beach House is Perth's only absolute beachfront restaurant, bar and function space, three steps from the beautiful white sands of Bathers Beach. Enjoy the ultimate Sunday, book a beach lounge where you can enjoy service at your lounge, the white sand of Bathers Beach between your toes and the relaxing atmosphere of Australia's first licensed beach.  With only 24 lounges available you better get in quick....

The Fremantle Waterfront is a fully operating port with a lively bustling harbour atmosphere, a vibrant destination that is popular with both locals and visitors alike. It is sometimes referred to as the Maritime Museum Precinct.
We like to encourage visitors to visit Victoria Quay, the south-east side of the Docks known as the Fremantle Waterfront District or locally as "Victoria Quay."

The Waterfront district is accessible at the end of the Historic West End, south of the Train Station past the Port Authority Building. We recommend taking the FREE CAT Bus directly to the E Shed and Maritime Museum.